Eeek! – you have to understand that i was just dragged out from my office without warning to contribute to this fundraising video, on the hoof, so obviously all I can think about is how it could be better! – but this is where I work 🙂

If you’d like to support us,
I have signed up, with husband and teenagers, to do the extreme mad monk mud obstacle course/mud run on the 17th of May 2014
http://xrunner.co.uk/mad-monk-obstacle-course-race/ to raise money for the MS Therapy Centre and the MS Trust

My Just Giving page for MS Therapy Centre is http://www.justgiving.com/miranda-olding1 ( if you read this after that date, just use the page at the end of the video)

and the MS Trust is http://www.justgiving.com/miranda-olding

THANKYOU FOR TAKING AN INTEREST, THANKYOU FOR WATCHING, AND IF YOU DONATED, MASSIVE BIG ENORMOUS THANKYOU, YOUR MONEY WILL BE VERY WELL USED!

Just spotted this is on the blog http://multiple-sclerosis-research.blogspot.co.uk/.  It’s research done on EAE – the experimental animal version of MS they induce in rats for research purposes.

Here they used normobaric oxygen – presumably that’s just oxygen at normal pressure. In MS Therapy centres across the UK you can use hyperbaric oxygen ( oxygen given at pressure so that it permeates the tissues of the body more effectively), and many people feel a great benefit from it. I must dig out all the research that’s been done on it.

Here’s some people at the Bedford MS Therapy in the oxygen tank, and one of the volunteers manning the shiny knobs and buttons outside! 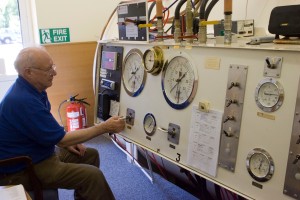 In terms of national guidelines, the research that’s been done in the past has not ‘cut the mustard’ to make hyperbaric oxygen a recommended clinical action. However, when you consider the practical and ethical difficulties of rounding up control groups ( who get fake oxygen), so that the research meets the standards required, it’s not surprising that this has not been managed.

More Oxygen Please, it’ll do wonders for my relapse

To explore the presence and consequences of tissue hypoxia in experimental autoimmune encephalomyelitis ((EAE), an animal model of multiple sclerosis (MS)).

METHODS: EAE was induced in Dark Agouti (DA) rats by immunization with recombinant myelin oligodendrocyte glycoprotein (rMOG) and adjuvant. Tissue hypoxia was assessed in vivo using two independent methods: an immunohistochemical probe administered intravenously, and insertion of a physical, oxygen-sensitive probe into the spinal cord. Indirect markers of tissue hypoxia (e.g. expression of hypoxia-inducible factor-1α (HIF-1α), vessel diameter and number) were also assessed. The effects of brief (one hour) and continued (7 days) normobaric oxygen treatment on function were evaluated in conjunction with other treatments, namely administration of a mitochondrially-targeted antioxidant (MitoQ) and inhibition of inducible nitric oxide synthase (1400W).

RESULTS: Observed neurological deficits were quantitatively, temporally and spatially correlated with spinal white and grey matter hypoxia. The tissue expression of HIF-1α also correlated with loss of function. Spinal microvessels became enlarged during the hypoxic period, and their number increased at relapse. Notably, oxygen administration significantly restored function within one hour, with improvement persisting at least one week with continuous oxygen treatment. MitoQ and 1400W also caused a small but significant improvement.

INTERPRETATION: We present chemical, physical, immunohistochemical and therapeutic evidence that functional deficits caused by neuroinflammation can arise from tissue hypoxia, consistent with an energy crisis in inflamed CNS tissue. The neurological deficit was closely correlated with spinal white and grey matter hypoxia. This realization may indicate new avenues for therapy of neuroinflammatory diseases such as MS.

Comment below is from the authors of the msresearch blog:
‘This study suggests that there is lack of oxygen in tissues during EAE, which has nothing to do with CCSVI, and if you give rats high amounts of oxygen they do better’